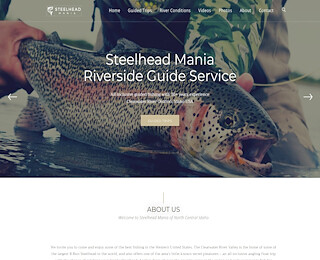 If you're looking for a chinook salmon fishing guide in Idaho, check out Steelhead Mania.  Our prices are the best in the region, and our guides are the most experienced you will find.   We know the rivers, lakes, and streams of Idaho like the backs of our hands, and we know the behaviors of the salmon within them.

Steelhead Mania will provide you with a reputed salmon fishing guide.  Idaho is home to some of best chinook fishing on earth.  The meat of the chinook salmon is arguably the best-tasting of all the salmon varieties.  Perhaps that's why chinook salmon is the best-selling salmon in the world.

Before fishing with you salmon fishing guide in Idaho, it might be helpful if you learn the terms associated with salmon.  Indeed, there are enough terms that it's almost like learning a new language to talk about salmon.  Let's examine some of these terms:

Alevin: This term is used to describe a salmon's lifestage between egg and fry.  Alevins appear to have a pot belly.  These "pot bellies" are remaining egg sacs.  The egg sac feeds the salmon until they're mature enough to venture out on their own.

Anadromous: Salmon are anadromous fish, meaning that they spend a big part of their lives both in saltwater and freshwater.

Emergence: This term is used to describe the act of the salmon leaving its sac at the "fry" stage.

Fry: The term "Fry" isn't referring to how we cook the salmon.  A fry is a juvenile salmon that has gone out on his own in the river or stream.

Kype: The kype of a salmon is the hooked-shape jaw male salmon develop

Smolt: Also a juvenile salmon, a smolt will leave its birth stream or river and enter the ocean.  At this stage in their lives, the salmon will lose their camouflage colors and become a solid chrome color.

Idaho's chinook salmon are the most sought after variety on earth.  Every year, anglers come from all over the world in hopes of catching this anadromous fish.  At Steelhead Mania, our salmon fishing guides know Idaho waters well.  We have all the trips, tips, and techniques to help you pull a monster.